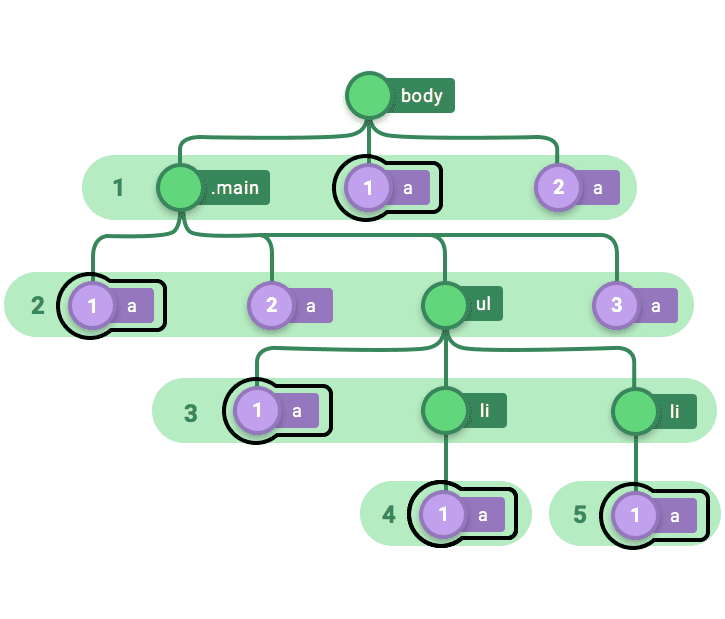 Let’s be honest — there are times when CSS can really hurt your brain. It’s hard enough to center an element inside its parents.

Today, we’re going to make sense of an even more challenging aspect of CSS: pseudo-classes.

You may be thinking, “But I’m here to learn pseudo-classes. Why are we talking about selectors?” Well, these are basically the same thing, and I will use these terms interchangeably.

Pseudo-classes are sometimes hard to grasp, mainly because they’re presented in an abstract way. So I’ll take a different approach here and help you understand these by drawing a DOM tree.

The Markup and The Tree

First, take a look at this block of HTML. I’ll use this code in all my examples.

Now I’m going to convert this code into something more visual and more intuitive: a tree.

Here’s what the relation between body and its three children looks like when you is represent it as a tree:

One thing to keep in mind is that the order in which children are placed in the tree is important. Children located top to bottom in code are placed left to right in the tree.

Next, let’s look at the .main div:

Similarly, we step down each level of nesting and draw the complete tree out of the HTML code.

In order for this article to bear any fruit for you, it’s important that you understand this tree.

“Ha ha nice pun there!” “Thanks!” Increment the pun counter to 1, and let’s move to our very first pseudo-class.

what-you-want-to-select can be used to select anything that exists as a collection in the DOM. Here, allow me to go ahead and show you an example:

In the code snippet shown above, what-you-want-to-select are anchor elements (the a tag), and the filter is only-of-type. We’ll see in a moment what this selector does.

First, I’ve setup a codepen for if you’re too lazy to create a tester project. You’re welcome, friend!

You can follow along, see the changes, get confused, then come back to this article for the explanation. You do your part, I’ll do mine.

Here’s me doing my part, explaining the code shown above. We’ll start by selecting everything that there is, and then eventually filter down.

Next, since anchor elements are what-you-want-to-select, we’ll do just that:

We’ve selected all the anchor element in each of the sections and numbered them consecutively left to right. And I mentioned, the order — left to right — is important.

This is where what-you-want-to-select part ends and the filtering begins.

Let’s fast forward to the part where we end selecting all the what-you-want-to-selects (anchor elements in our case).

The filter first-of-type translates to selecting in each of the sections only the first occurrence of the anchor element.

Here’s what the code that accomplishes this looks like:

In case you forgot the hard work I did for you setting up the CodePen, here’s the link again to check out what the code renders in a browser.

If you can’t tell by the name, last-of-type is the exact opposite of first-of-type. Which therefore means in each section of the tree, instead of selecting the first occurrence, select the last ones.

And now we finally bite into the juicy part of the article, there’s simple CSS with some fifth grade Math toppings, hope you enjoy savouring it.

Let’s declare the following style to begin with.

It looks a little cryptic but is quite simple really. To read the selector simply take the number from the parentheses and replace nth in the selector name with that number’s ordinal form.

Alright coming back, a:nth-of-type(1) can be therefore read as a:first-of-type and no surprise it works exactly like a:first-of-type and results in the elements getting selected as shown below; just the anchor elements which are first of their types in their respective section.

Well that is fine and dandy, but let’s try something different here.

If you guessed it right, which I am sure you didn’t, no anchor elements get selected in this case. As the numbering of types (and children as we’ll see) in each section starts from 1 and not 0, there is no “0” anchor elements in any of the sections and therefore a:zeroth-of-type selects nothing. And so will be the case for a:nth-of-type(5) or a:nth-of-type(6/7/8) because there are no a:fifth-of-type or a:sixth/seventh/eighth-of-type in any of the sections.

But if we went ahead and used…

… quite clearly sections 1 and 2 have a second-of-type anchor elements and hence those are the ones that get selected.

Similarly, just to reinforce the point here, if we went ahead and declared the following style,

it will select the third anchor elements in the second section as section 2is the only section with a :third-of-type anchor element.

Quite simple isn’t it? But numbers aren’t the only thing that you can pass into :nth-of-type(…) this bloke is more powerful that that, you can also pass in formulas of form (a * n) + b (or for brevity an + b). Where a and b are constants and n is a value >= 0. How did you like the Math topping sir? don’t worry it’ll all make sense in a second.

The formula that’s passed in the selector above is (1 * n) + 0 [= n], a is 1, b is 0 and n is well, n. What happens next is, starting from 0 the numerical value of n is incrementally plugged into the formula and selection is made. Therefore a:nth-of-type(n) basically translates to

Hence this results in all the anchor elements getting selected.

Starting from 0 and incrementally plugging values of n in the formula generates the following selectors.

This selector functions exactly like the previous one, but with one little difference. See for yourself...

Notice how in each level numbering of anchor types is done from right to left instead of normal left to right. That is the only difference. last-of-type accepts numbers and formulas and even/odd just like nth-of-type except when selection is made the last type is treated as first, second last as second, third last as third and so on…

With that we come to an end of *-of-type selectors. Hope it was a fun ride for you, we started with only-of-type then moved to first-of-type, last-of-type and took a huge dip into nth-of-type(…) and nth-last-of-type(..). If in case somewhere in the middle you lost your grip and fell off I encourage you play around with this pen and re read the explanation.

Alright, time to hop on to the next one in this less visited corner of the CSS theme park. Another category of pseudo selectors/classes we’re going to delve into are *-child classes. With a clear understanding of how *-of-type selectors work grasping the concept behind *-child selectors should be a cinch for you. “Cinch? What’s that? Is it a unit of measurement?” No, it means an extremely easy task. Anyway, let’s start with our very first *-child selector, :only-child.

I had a friend who was never his mother’s favorite, and he was an only child. Just wanted to plug that in there, anyways, notice that in contrast with *-of-type selectors we are no longer numbering types, but children, starting of course from 1 (and not 0). When compared with only-of-type, the anchor element in section 3 is not selected as its parent (ul) has 3 children therefore even though it (the anchor element in level 3) is an only child of type ‘a’ of its parent, its not the only child, there are 2 lis as well.

For if you are a little confused as of why the a in section 1 wasn’t selected it’s because the first child in section 1 (whose parent is body) is .main, the first a in section 1 is the second child and couldn’t pass the first-child filter, that is the exact reason why the poor bloke ended up not being selected and was given a big hashtag fuck off. Let’s continue to the next one.

This is the part where selectors should start to get self explanatory and you should start thinking I am dumb trying to explain them to you. But my name is not blurryface and I don’t care what you think. “Nice twenty one pilots reference there” yeah I know, thanks. Now, look at the following style declaration.

what-you-want-to-select ? “Anchor elements.” And the filter you want to use? last-child. That quite simply translates to select those anchor elements which are the last child of their parent. Or, in other words select anchor elements whose parent finally decided it wasn’t fun anymore and stopped after that bloke was born. Below is what the tree looks like with :last-child selections.

I hope you were able to digest the Math topping you got served last time, because it’s about to happen again only this time on a slightly different crust.

Now, I would like you to take all your attention and laser point it to the following example.

Just like with :nth-of-type, in the selector name take the number in parentheses and replace nth with that number’s ordinal form. Therefore the selector shown in example is equivalent to a:first-child and works exactly the same; i.e selects all the anchor elements, given that they are the first child of their parent.

That should nail the similarity between the two nth-selectors (nth-of-type and nth-child), but we will anyways go ahead and take a look at another example.

We begin by incrementally plugging in values of n starting from 0 into the formula, which makes us realize that the selector shown above is basically equivalent to the ones shown below.

As it is, if the selector gets numbers out of bounds (like -1, 5, 6… in the case above) fed into it, it just ignores them. Following is how the tree looks with a:nth-child(2n-1) applied.

Folks at CSS Tricks have a very informative article called Useful :nth-child Recipes you should check it out and put your knowledge of :nth-child to test. I challenge you m8.

With that we will move to the last selector of this article which punningly is :nth-last-child Holy shit! why is “punningly” a word even?

This selector works exactly like :nth-child except that it starts selecting elements from the opposite direction just like that annoying high school teacher who would ask questions to the class starting from the peaceful folks seated at the last benches. God I hated him. If you look at the trees drawn so far, the children are numbered left to right in each section, but this selector bloke sees the tree like so

The children in each section are numbered right to left. So if we go ahead and apply the following style

the anchor elements will get selected as shown below. 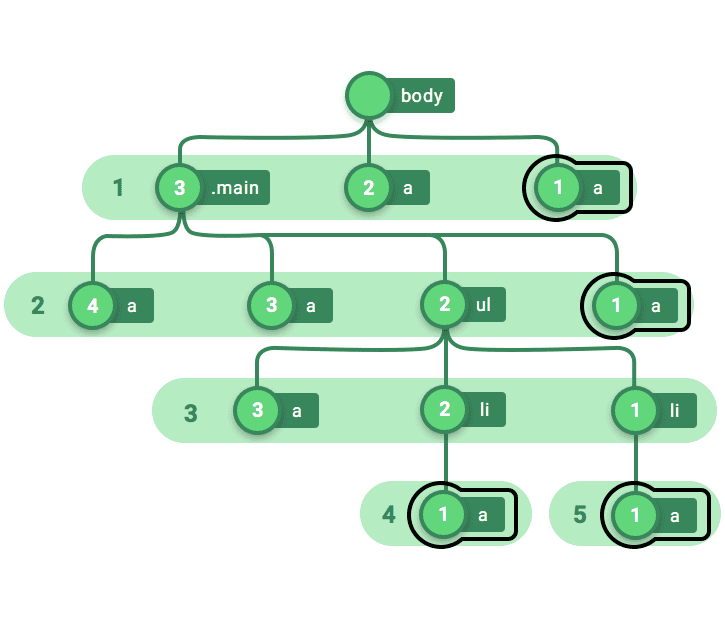 Quite straightforward isn’t it? This selector also very comfortably accepts formulas (of form an + b) and even/odd strings, the selections though, are made from the opposite end.

OK, this is where our journey together ends. You can pay for your ticket by tweeting this article to your developer buddies.

I hope you enjoyed reading this and learned something new, including some shiny new English words.

This is Nash signing off. I’ll see you in the next article. Follow me on Twitter to keep in touch. I tweet about dev-related stuff. A lot.